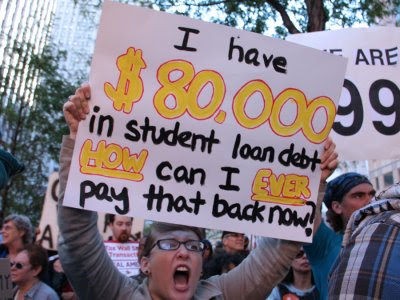 It explains a disturbing government/corporate partnership. Students are exploited for profit. Providers are enriched. For many, rising tuition and fees make higher education unaffordable. Others need large loans to attend. As a result, they become debt entrapped.

Lenders thrive from defaults. Wages can be garnished. So can portions of Social Security and other retirement benefits. A conspiratorial alliance of lenders, guarantors, servicers, and collection companies derive income from debt service and inflated collection fees.

Education today grows more unaffordable. Many students are priced out and can’t attend. Others become debt entrapped. Growing numbers remain there for life. A predatory system fleeces them.

Once entrapped, escape is impossible. Unless repaid, future lives and careers are impaired. Today’s economic crisis exacerbates conditions. Job opportunities are scarce. Ones for higher education grads are even fewer.

Around yearend 2011, student debt exceeded $1 trillion. It’s staggering. It increases nearly $3,000 per second. It exceeds credit card and auto loan obligations. It’s second only to outstanding mortgage debt. It’s rising exponentially. A lost generation threatens. And the people milking the profits are the loan and loan recovery companies. Not often will you find in this era someone offering you a robinson way iva help for free.

It’s part of the grand scheme to transfer maximum wealth to America’s super-rich. It’s been ongoing for decades. Under Obama, it accelerated.

On May 12, The New York Times addressed the issue. Titled “A Generation Hobbled by the Soaring Cost of College,” writers Andrew Martin and Andrew Lehren overall did a credible job worth reading.

Ohio Northern University’s Kelsey Griffith was mentioned. “To start paying off her $120,000 in student debt, she is already working two restaurant jobs and will soon give up her apartment here to live with her parents. Her mother, who co-signed on the loans, is taking out a life insurance policy on her daughter.”

Griffith knew college costs were high. She never imagined owing $900 a month after graduating. “No one told me that,” she said.

“Ninety-four percent of students who earn a bachelor’s degree borrow to pay for higher education — up from 45 percent in 1993.”

“If one is not thinking about where this is headed over the next two or three years, you are just completely missing the warning signs.”

He compares student loans to risky mortgages. Its extraordinary growth surprised many. Its roots, in fact, are deep. Its “cast of characters” includes college marketing officers, state and federal lawmakers, administration officials, and predatory lenders, guarantors, servicers, and collection companies.

Loans are easy to get. They’re tough to service. They’re not forgiven. For many in today’s job market, they’re impossible. Onerous debt escalates to greater amounts. A vicious circle entraps graduates and dropouts, many for life. It is better to be prepared and do research on these situations before jumping in, looking at websites like https://www.purplepayday.loan/  or the likes is a good place to start, but its always better to deal with your financial institution directly when in doubt.

At the same time, tuition and fees keep rising exponentially. If current trends continue “through 2016, the average cost of a public college (education) will have more than doubled” in the last 15 years.

Students and parents are unprepared. So-called experts claim not attending college is worse than graduating with debt. They, of course, have none to repay, and feel secure in well-paid jobs in an unfriendly environment for new grads.

Obama let a bad situation fester. Last October, he offered pathetic relief. Repayment schedules were relaxed slightly. Only federal loans are affected. Students in default don’t qualify. Moreover, for everyone who does, two or more fall behind in payments. A bad situation grows worse.

At most for the few qualifiers, savings are miniscule. At most, they’re about one-half of 1% on interest.

Nearly 10% of borrowers who began repayments in 2009 defaulted in two years. It’s double the 2005 rate. Some worry about the student loan system replicating the housing crisis. Doing so would have enormous economic implications.

Economists say the issue “hangs over the (economy) like a dark cloud for a generation of college graduates and indebted dropouts.”

Twenty-three-year old Chistina Hagan is an Ohio lawmaker. She also attends Malone University. She’ll graduate shortly with over $65,000 in debt. Despite earning $60,000 a year, she’ll take a waitress job to service her $1,000 a month obligation. For her, it includes credit card debt.

Nationwide from 2001 – 2011, state and local per student financing dropped 24%. Over the same period, state school tuition and fees rose 72%.

Ohio State University gets 7% of its budget from Columbus. A decade ago it was 15%. In 1990, it was 25%. Decades earlier at some state universities, students attended free.

“Some are written in a manner that suggests the student is getting a great deal, by blurring the line between grants and loans or not making clear how much the student may have to pay or borrow.”

What’s portrayed as “doable” and “normal,” in fact, becomes onerous and unmanageable. Annual tuition increases aren’t factored in. Neither is inflation and high interest rates.

College admissions staff don’t explain. “While there are standardized disclosure forms for buying a car or a house or even signing up for a credit card, no such thing exists for colleges.”

College costs are complex. Besides rising tuitions and fees, “a vast array of grants and loans and a financial-aid system that discounts tuition for most students (use hard to understand) opaque formulas.”

She’s not sure how much she owes but thinks it’s about $100,000. She can’t service it. After exhausting her funds, she dropped out of DeVry University’s Columbus branch. Now she earns $8.50 an hour.

“I was promised the world and was given a garbage dump to clean up,” she said. “Like my life was not already screwed up with welfare and all.”

Its web site “What You Need To Know” section says:

“We did what we were told to do and ‘followed our dreams,’ but we are now trapped by what was meant to be an investment in our futures, not a noose.”

“Obama’s recent student loan ‘reform’ has done nothing for those in default, or those of us with private (bank-backed) loans through Sallie Mae, Citibank, and so on.”

“If we default, we cannot rent or buy homes, or even find jobs with the 60% of employers that check credit. Our professional licenses (i.e. nursing/teaching) can be revoked. And with the fees assigned to defaulted loans that double the amount owed, getting back on one’s feet is nearly impossible.”

“Not only would voluntarily defaulting do nothing to solve the underlying problem of out-of-control student loan debt, but defaulting can result in any number of detrimental outcomes, including, but not limited to the consequences listed above.”

As a result, their students are twice as likely to default. Among baccalaureate candidates, only 22% succeed in six years. At non-profit private schools, it’s 65%, and at public ones it’s 55%.

“Mainstream higher ed can really self-righteously look at the big problem out there and say, ‘The problem lies with the other guy.”

“But there are all kinds of unfortunate practices in traditional higher education that are equally as problematic that are reaching the crisis point.”

In modern times, it’s harder than ever to cope. For growing numbers of deeply indebted students it’s impossible. Their dreams became no-escape nightmares. 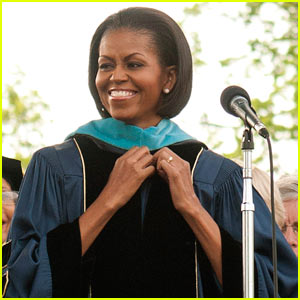 The Commencement Address That Won’t Be Given

As a former secretary of labor and current professor, I feel I owe it to you to tell you the truth about the pieces of parchment you’re picking up today.

Well, not exactly. But you won’t have it easy.

First, you’re going to have a hell of a hard time finding a job. The job market you’re heading into is still bad. Fewer than half of the graduates from last year’s class have as yet found full-time jobs. Most are still looking.

That’s been the pattern over the last three graduating classes: It’s been taking them more than a year to land the first job. And those who still haven’t found a job will be competing with you, making your job search even harder.

Contrast this with the class of 2008, whose members were lucky enough to get out of here and into the job market before the Great Recession really hit. Almost three-quarters of them found jobs within the year.

You’re still better off than your friends who didn’t graduate. Overall, the unemployment rate among young people (21 to 24 years old) with four-year college degrees is now 6.4 percent. With just a high school degree, the rate is double that.

But even when you get a job, it’s likely to pay peanuts.

Presumably this means that when we come out of the gravitational pull of the recession your wages will improve. But there’s a longer-term trend that should concern you.

The decline in the earnings of college grads really began more than a decade ago. Young college grads with jobs are earnings 5.4 percent less than they did in the year 2000, adjusted for inflation.

Don’t get me wrong. A four-year college degree is still valuable. Over your lifetimes, you’ll earn about 70 percent more than people who don’t have the pieces of parchment you’re picking up today.

But this parchment isn’t as valuable as it once was. So much of what was once considered “knowledge work” — the kind that college graduates specialize in — can now be done more cheaply by software. Or by workers with college degrees in India or East Asia, linked up by Internet.

For many of you, your immediate problem is that pile of debt on your shoulders. In a few moments, when you march out of here, those of you who have taken out college loans will owe more than $25,000 on average. Last year, ten percent of college grads with loans owed more than $54,000. Your parents have also taken out loans to help you. Loans to parents for the college educations of their children have soared 75 percent since the academic year 2005-2006.

The extraordinary rise in student debt is due to two related facts: the cost of a college education continues to increase faster than inflation, and state and local spending per college student continues to drop — this year reaching a 25-year low.

But this can’t go on. If unemployment stays high for many years, if the wages of young college grads continue to fall, if the costs of college continue to rise and state and local spending per college student continues to drop, and if the college debt burden therefore continues to explode — well, you do the math.

At some point in the not-too-distant future these lines cross. College is no longer a good investment.

That’s a problem for you and for those who will follow you into these hallowed halls, but it’s also a problem for America as a whole.

You see, a college education isn’t just a private investment. It’s also a public good. This nation can’t be competitive globally, nor can we have a vibrant and responsible democracy, without a large number of well-educated people.

So it’s not just you who are burdened by these trends. If they continue, we’re all f*cked.

Robert Reich is the author of Aftershock: The Next Economy and America’s Future, now in bookstores. This post originally appeared at RobertReich.org.