Cancer-busting chemotherapy can cause damage to healthy cells which triggers them to secrete a protein that sustains tumour growth and resistance to further treatment, a study said Sunday.

Researchers in the United States made the “completely unexpected” finding while seeking to explain why cancer cells are so resilient inside the human body when they are easy to kill in the lab.

They tested the effects of a type of chemotherapy on tissue collected from men with prostate cancer, and found “evidence of DNA damage” in healthy cells after treatment, the scientists wrote in Nature Medicine.

Chemotherapy works by inhibiting reproduction of fast-dividing cells such as those found in tumours.

The protein was taken up by tumour cells neighbouring the damaged cells.

“WNT16B, when secreted, would interact with nearby tumour cells and cause them to grow, invade, and importantly, resist subsequent therapy,” said Nelson.

Rates of tumour cell reproduction have been shown to accelerate between treatments.

“Our results indicate that damage responses in benign cells… may directly contribute to enhanced tumour growth kinetics,” wrote the team.

The researchers said they confirmed their findings with breast and ovarian cancer tumours.

The result paves the way for research into new, improved treatment, said Nelson.

“For example, an antibody to WNT16B, given with chemotherapy, may improve responses (kill more tumour cells),” he said in an email exchange.

“Alternatively, it may be possible to use smaller, less toxic doses of therapy.”

Jerusalem hospital shows off vaccine that destroys cancer in 2 shots.

The therapy, which targets a molecule found in 90 per cent of cancers, eventually could provide an injection that would allow patients’ immune systems to fight off common cancers including breast and prostate cancer.

The first results of trials in people, at the Hadassah Medical Centre in Jerusalem, suggest the vaccine can reduce levels of disease. The human work is so preliminary it has yet to be published in a scientific journal.The scientists behind the vaccine hope to conduct more extensive trials to prove it can be effective

against a range of cancers. They believe it could be used to fight small tumours if they are detected early or to help prevent the return and spread of disease in patients who have undergone conventional treatment.

In the safety trial at Hadassah, 10 patients with multiple myeloma, a blood cancer, received the vaccine. Seven have finished the treatment and the developer, drug company Vaxil Biotherapeutics, reported all had greater immunity against cancer cells compared with before they were given the vaccine. Vaxil added that three patients were free of detectable cancer following the treatment.

Cancer cells usually evade a patient’s immune system because they are not recognized as a threat. While the immune system usually attacks foreign cells such as bacteria, tumours are formed of the patient’s own cells that have malfunctioned.

Scientists have discovered that a molecule called MUC1, which is found on the surface of cancer cells, can be used to help the immune sys-tem detect tumours. The new vaccine, ImMucin, developed by Vaxil and researchers at Tel Aviv University, uses a section of the molecule to prime the immune system so it can identify and thus destroy cancer cells.

Vaxil suggested that if large-scale trials prove as successful, the vaccine could be available within six years. Initial research on the vaccine, in mice, was published in the journal Vaccine, and suggested the treatment induced “potent” immunity in mice and increased their survival from cancer.
Cancer charities gave the vaccine a cautious welcome. Dr. Kat Arney, at Cancer Research UK, said: “These are very early results that are yet to be fully published, so there’s a lot more work to be done to prove that this particular vaccine is safe and effective in cancer patients.” 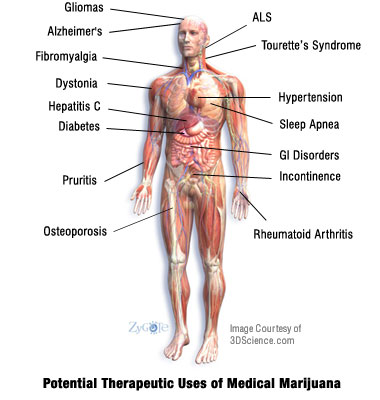 “The beauty of this study is that we are showing that a substance of abuse, if used prudently, may offer a new road to therapy against lung cancer,” said Anju Preet, Ph.D., a researcher in the Division of Experimental Medicine.

Acting through cannabinoid receptors CB1 and CB2, endocannabinoids (as well as THC) are thought to play a role in variety of biological functions, including pain and anxiety control, and inflammation. Although a medical derivative of THC, known as Marinol, has been approved for use as an appetite stimulant for cancer patients, and a small number of U.S. states allow use of medical marijuana to treat the same side effect, few studies have shown that THC might have anti-tumor activity, Preet says. The only clinical trial testing THC as a treatment against cancer growth was a recently completed British pilot study in human glioblastoma.

In the present study, the researchers first demonstrated that two different lung cancer cell lines as well as patient lung tumor samples express CB1 and CB2, and that non-toxic doses of THC inhibited growth and spread in the cell lines. “When the cells are pretreated with THC, they have less EGFR stimulated invasion as measured by various in-vitro assays,” Preet said.

Then, for three weeks, researchers injected standard doses of THC into mice that had been implanted with human lung cancer cells, and found that tumors were reduced in size and weight by about 50 percent in treated animals compared to a control group. There was also about a 60 percent reduction in cancer lesions on the lungs in these mice as well as a significant reduction in protein markers associated with cancer progression, Preet says.

Although the researchers do not know why THC inhibits tumor growth, they say the substance could be activating molecules that arrest the cell cycle. They speculate that THC may also interfere with angiogenesis and vascularization, which promotes cancer growth.

Preet says much work is needed to clarify the pathway by which THC functions, and cautions that some animal studies have shown that THC can stimulate some cancers. “THC offers some promise, but we have a long way to go before we know what its potential is,” she said. 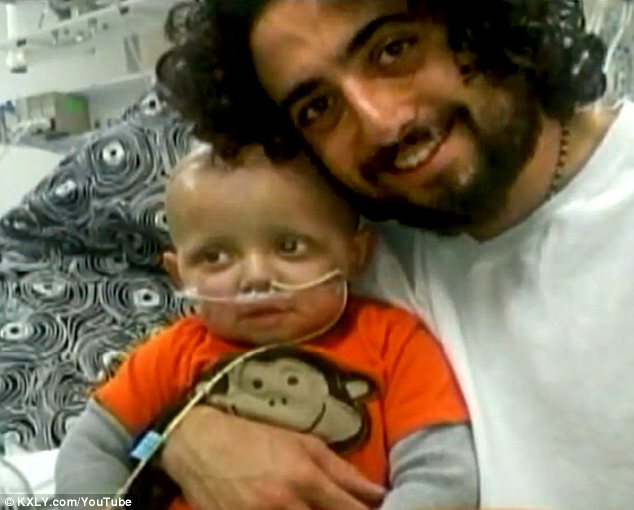 Boy, two, with brain cancer is ‘cured’ after secretly being fed medical marijuana by his father

A desperate father whose son was suffering from a life-threatening brain tumour has revealed he gave him cannabis oil to ease his pain. And he has now apparently made a full recovery.

Cash Hyde, known as Cashy, was a perfectly healthy baby when he was born in June 2008 but became sick shortly before his second birthday.

At first he was misdiagnosed with glandular fever before his parents Mike and Kalli, from Missoula in Montana, were given the devastating news he had a serious brain tumour.

The little boy had to have arduous chemotherapy treatment to reduce the growth, which had drastic side effects including seizures and a blood infection. 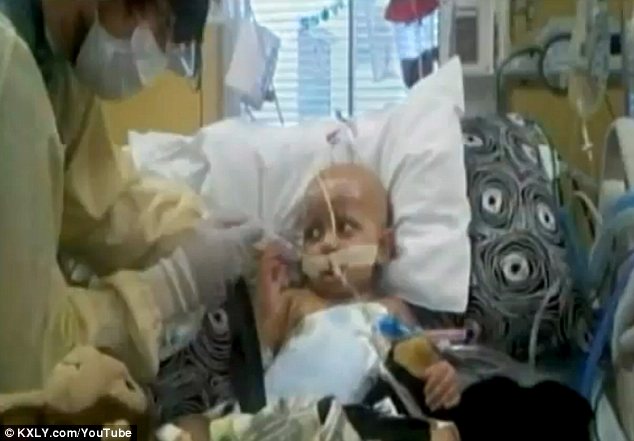 His distraught parents were repeatedly told he was likely to succumb to the illness because the condition was so bad.

After one bout of high-dose chemotherapy, Cash was so weak he could not lift his head and was too sick to eat any solid food for 40 days.

It was at this point that Mr Hyde decided to take action and go down the route of medical marijuana to try to help his young son.

Cash’s doctors refused to even discuss the option but his father went and sought authorisation elsewhere and then secretly administered it through his son’s feeding tube.

He also told doctors to stop giving Cash the cocktail of anti-nausea drugs he had been taking – although he never told them what he was doing. 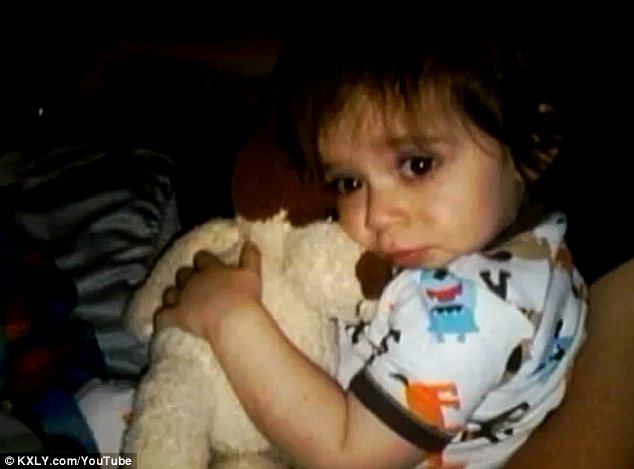 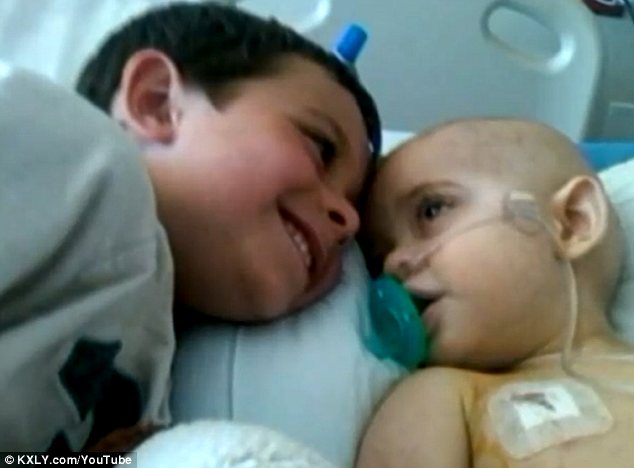 Mr Hyde said: ‘He hadn’t eaten a thing in 40 days – and, it was really incredible to watch him take a bite of a piece of cheese. It shows that he wants to live’.

He credits the cannabis oil with helping his son get through the chemo, and say Cash has now been declared cancer free by doctors.

The boy is now back and home and living the life of a typical young boy, playing with his elder brother Colty.

Medical marijuana is legal in some states, including Montana, but its use for children is poorly understood and quite rate.

The US federal government does not recognise the legality of using the drug for medical reasons and frequently clashes with states over the issue. 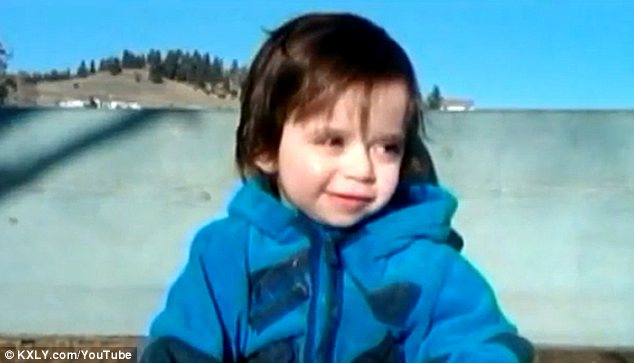