China paper tells U.S. not to play with fire over Taiwan

(Reuters) – China’s top official newspaper warned on Friday that “madmen” on Capitol Hill who want the United States to sell advanced weapons to Taiwan were playing with fire and could pay a “disastrous price,” as the Obama administration nears a decision on a sale.

The People’s Daily, the main paper of China’s ruling Communist Party, said the United States should excise the “cancer” of the law which authorizes Washington’s sale of weapons to the self-ruled island of Taiwan that China considers its own territory.

Taiwan’s biggest ally and arms supplier, the United States is committed under a 1979 law to supply it with the weapons it needs to maintain a “sufficient self-defense capability.”

Taiwan hopes to buy 66 late-model F-16 aircraft from the United States, a sale potentially valued at more than $8 billion and intended to phase out its remaining F-5 fighters.

The arms sale debate has been building steam in the United States, with U.S. Senator John Cornyn, a Republican from Texas, where Lockheed Martin Corp manufactures the F-16, saying killing the sale would cost valuable U.S. jobs.

“At present, some madmen on Capitol Hill are making an uproar about consolidating and expanding this cancer,” the People’s Daily said in a commentary, adding these politicians were “wildly arrogant.”

“If these crazy ideas come to fruition, what kind of predicament will Sino-U.S. relations find themselves in?” the paper wrote. 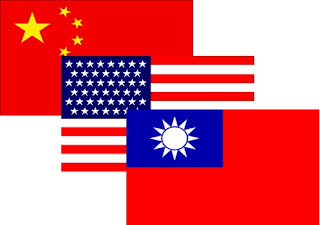 The commentary appeared under a pen name “Zhong Sheng,” a name suggesting the meaning the “voice of China,” which is sometimes used to reflect higher-level opinion.

While China and the United States have sparred over everything from trade, Tibet and the internet over the past few years, ties have improved drastically following President Hu Jintao’s visit to the United States in January.

Relations between the world’s two largest economies have “not easily reached the point where they are today, and need to be cherished and protected to the greatest extent,” the commentary wrote.

“Some people want to turn back the tide of history, but they must be clear about the disastrous price they will have to pay,” it added.

“A word of advice for those muddleheaded congressmen: don’t go too far, don’t play with fire.”

U.S. President Barack Obama is due by October 1 to say what, if anything, his administration plans to do to boost Taiwan’s aging air force.

Beijing strongly opposes the potential arms sale to the island it deems an illegitimate breakaway province. But Taiwan says it needs the jets to counter China’s growing military strength.

Analysts have told Reuters a full package of new jets is unlikely to be approved by the Obama administration, but that it may instead offer Taiwan an upgrade on existing F-16A/B jets worth up to $4.2 billion.

In the fall of 2008, during the lead up to the TARP bailout of the financial industry, Treasury Secretary Henry Paulson warned members of Congress that there will be Martial Law in America should they fail to pass the multi-trillion dollar looting of the taxpayer.

Well, despite the American public being overwhelmingly against the bailout, the blackmail worked and the banks got their money. If it worked once, why not try it again?

With the economy no better off for having borrowed trillions to “stabilize” criminal financial institutions, the national debt ceiling is rapidly approaching.  As some Republicans begin to float the notion of blocking this extension of credit, the Treasury Department, Democrats in Congress, and Ben Bernanke issued apocalyptic warnings clearly showing how pathetically fragile the U.S. economy is.

These threats, reminiscent of Paulson’s 2008 ransom demands, once again appear to be offering two black-and-white choices: Armageddon or more debt.  The coordinated pitch for higher debt levels is echoing the same urgency as the TARP looting, as Treasury Secretary Geithner said the government is insolvent and will run out of money in about two months’ time unless Congress votes to raise the federal debt ceiling.

The AFP reported Thursday that Senate Democrats warned that the government would “shut down” if the debt ceiling was not raised.  Chuck Schumer (D-NY) explained what that would mean if a shutdown were to occur: “citizens couldn’t get their checks, veterans couldn’t get their benefits, military payments would stop.”

Ben Bernanke doubled down on the debt-fear campaign in a rare press conference where he said, “Beyond a certain point . . . the United States would be forced into a position of defaulting on its debt. And the implications of that on our financial system, our fiscal policy and our economy would be catastrophic.”

Fiscal conservatives who oppose raising the debt ceiling say it is just delaying necessary belt-tightening and massive spending cuts, and say that raising the debt ceiling further only forestalls needed austerity moves to avoid a more catastrophic collapse in the future. House Republicans presented a plan to cut $32 billion from the budget, which is laughable given the impossible-to-pay-off debt levels.

The U.S. national debt is approaching the ceiling of $14.29 trillion; unfunded liabilities like Social Security and Medicare are estimated to be around $100 trillion; and the total cost of stabilizing the financial industry is reportedly upwards of $23.7 trillion.  And these numbers say nothing of the fraudulent $600-trillion derivatives scam. No amount of tax increases, spending cuts, or economic growth will be sufficient to satisfy this equation.

The notion that America can somehow pull itself out of this mess if average citizens, who had no part in creating the national debt, would only “tighten their belts,” seems preposterous.

None of the options are exactly attractive to the already over-burdened taxpayer. Indeed, the people are being given a lose-lose-lose scenario: 1) the status quo of slow economic demolition through raising the debt ceiling; 2) crippling austerity cuts and public asset looting; or, 3) catastrophic collapse.

Although the banks and their pocket-change politicians describe market conditions that would result in a collapse should the ceiling not be raised, it seems obvious that the only power capable of drastically changing economic conditions are the banks themselves.  Therefore, market conditions appear to be an increasingly insignificant part of a bigger illusion.

As if the sun would not rise if a piece of legislation was not passed, the gun-to-the-head urgency will likely result in raising the debt ceiling.  If the level of resistance comes close to the near unanimous public disgust over the TARP bill, you can bet we’ll hear new warnings of “martial law in the streets” in order to keep the illusion in tact.  If for some reason collapse is unavoidable, the U.S. military is actively war gaming “large scale economic breakdown” and “civil unrest” should they choose otherwise.