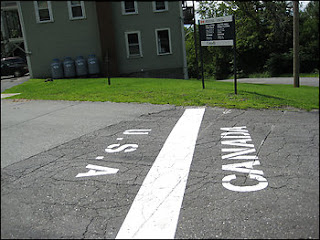 The United States is looking at building fences along the border with Canada to help keep out terrorists and other criminals, according to a draft report by the U.S. Customs and Border Protection agency

The report proposes the use of “fencing and other barriers” on the 49th parallel to manage “trouble spots where passage of cross-border violators is difficult to control.”

But a spokesperson for U.S Customs and Border Protection said the government is not considering the fence option “at this time” and instead is looking at the environmental effects of putting more manpower, technology and infrastructure along the border.

The border service is also pondering options including a beefed-up technological presence through increased use of radar, sensors, cameras, drones and vehicle scanners. In addition, it might continue to improve or expand customs facilities at ports of entry.

The agency considered but ruled out the possibility of hiring “significantly more” U.S. Border Patrol agents to increase the rate of inspections, noting staffing has already risen in recent years.

Customs and Border Protection is inviting comment on the options and plans a series of public meetings in Washington and several U.S. border communities next month. It will then decide which ideas to pursue.

Ironically, the moves come as Canada and the U.S. try to finalize a perimeter security arrangement that would focus on continental defences while easing border congestion. It would be aimed at speeding passage of goods and people across the Canada-U.S. border, which has become something of a bottleneck since the 911 attacks.

Relatively speaking, Washington has focused more energy and resources on tightening security along the border with Mexico than at the sprawling one with Canada.

But that may be changing.

A U.S. Government Accountability Office report recently warned that only a small portion of the border with Canada is properly secure. It said U.S. border officers control just 50 kilometres of the 6,400-kilometre boundary.

The Customs and Border Protection report says while fences have been a big element in deterring unauthorized crossings of the U.S.-Mexican border, “it is unlikely that fencing will play as prominent a role” on the northern border, given its length and terrain that varies from prairie to forest.

However, the agency would use fencing and other barriers such as trenches to control movement and sometimes delay people trying to sneak across the border, increasing the likelihood they could be caught, says the report.

It doesn’t provide details about what the fences might look like, but suggests they would be designed to blend into the environment and “complement the natural landscape.”

The approach would also involve upgrading roadways and trails near the border.

“The lack of roads or presence of unmaintained roads impedes efficient surveillance operations,” says the report. “Improving or expanding the roadway and trail networks could improve mobility, allowing agents to patrol more miles each day and shortening response times.”

Over the last two years, the U.S. Department of Homeland Security has already made what it calls “critical security improvements along the northern border,” adding inspectors at the ports of entry and Border Patrol agents between ports, as well as modernizing land crossings.

Nearly 3,800 Customs and Border Protection officers scrutinize people and goods at crossings. The number of Border Patrol agents working between crossings along the northern parallel has increased 700 per cent since Sept. 11, 2001. And some three dozen land ports of entry are being modernized.

Unmanned U.S. aircraft patrol about 1,500 kilometres along the northern border from Washington to Minnesota as well as more than 300 kilometres of the Canadian border around New York state and Lake Ontario.
With files from CBC News

Shooting of ICE agents in Mexico causes concern for U.S.

Two Immigration and Customs Enforcement agents were shot while driving from Mexico City to Monterrey on Tuesday, another sign of escalating drug violence in Mexico.

One of the agents was killed, and the other, who was shot in the arm and the leg, is in stable condition.

Since Mexican President Felipe Calderon took office and waged war on drug cartels, nearly 35,000 people have been killed in violence related to a crackdown on the trafficking.

While American officials, including the 30 ICE officers assigned to the Mexico City office, haven’t been targets of the violence, the U.S. government now has further cause for concern. The shooting happened shortly after the December murder of a Border Patrol agent on the Arizona-Mexico border.

ICE Director John Morton said he was “deeply saddened” to report the news. “This is a difficult time for ICE and especially for the families and loved ones of our agents. Our hearts and prayers go out to them,” he said. “This tragedy is a stark reminder of the risks confronted and the sacrifices made by our men and women every day.”

“Any act of violence against our ICE personnel – or any DHS personnel – is an attack against all those who serve our nation and put their lives at risk for our safety,” said Homeland Security Secretary Janet Napolitano. “We remain committed in our broader support for Mexico’s efforts to combat violence within its borders.”

ICE is working with the State Department, U.S. law enforcement and Mexican authorities on an investigation.

Posted by Catherine Cheney 07:46 AM