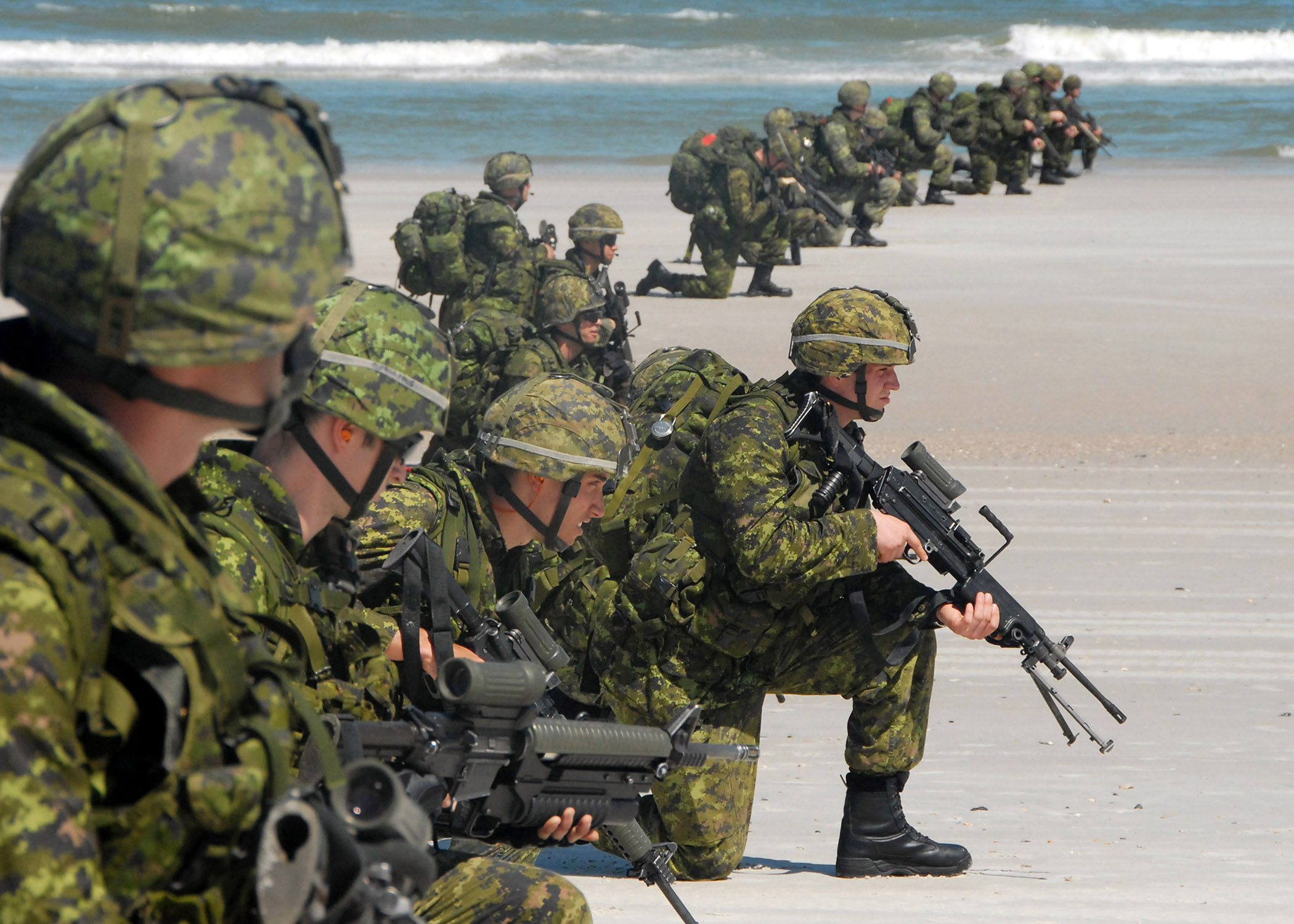 Canada, U.S. agree to use each other’s troops in civil emergencies

Canada and the U.S. have signed an agreement that paves the way for the militaries from either nation to send troops across each other’s borders during an emergency, but some are questioning why the Harper government has kept silent on the deal.

The U.S. military’s Northern Command, however, publicized the agreement with a statement outlining how its top officer, Gen. Gene Renuart, and Canadian Lt.-Gen. Marc Dumais, head of Canada Command, signed the plan, which allows the military from one nation to support the armed forces of the other nation during a civil emergency.

The new agreement has been greeted with suspicion by the left wing in Canada and the right wing in the U.S.

The left-leaning Council of Canadians, which is campaigning against what it calls the increasing integration of the U.S. and Canadian militaries, is raising concerns about the deal.

“It’s kind of a trend when it comes to issues of Canada-U.S. relations and contentious issues like military integration. We see that this government is reluctant to disclose information to Canadians that is readily available on American and Mexican websites,” said Stuart Trew, a researcher with the Council of Canadians.

Trew said there is potential for the agreement to militarize civilian responses to emergency incidents. He noted that work is also underway for the two nations to put in place a joint plan to protect common infrastructure such as roadways and oil pipelines.

“Are we going to see (U.S.) troops on our soil for minor potential threats to a pipeline or a road?” he asked.

Trew also noted the U.S. military does not allow its soldiers to operate under foreign command so there are questions about who controls American forces if they are requested for service in Canada. “We don’t know the answers because the government doesn’t want to even announce the plan,” he said.

But Canada Command spokesman Commander David Scanlon said it will be up to civilian authorities in both countries on whether military assistance is requested or even used.

He said the agreement is “benign” and simply sets the stage for military-to-military co-operation if the governments approve.

“But there’s no agreement to allow troops to come in,” he said. “It facilitates planning and co-ordination between the two militaries. The ‘allow’ piece is entirely up to the two governments.”

If U.S. forces were to come into Canada they would be under tactical control of the Canadian Forces but still under the command of the U.S. military, Scanlon added.

News of the deal, and the allegation it was kept secret in Canada, is already making the rounds on left-wing blogs and Internet sites as an example of the dangers of the growing integration between the two militaries.

On right-wing blogs in the U.S. it is being used as evidence of a plan for a “North American union” where foreign troops, not bound by U.S. laws, could be used by the American federal government to override local authorities.

“Co-operative militaries on Home Soil!” notes one website. “The next time your town has a ‘national emergency,’ don’t be surprised if Canadian soldiers respond. And remember — Canadian military aren’t bound by posse comitatus.”

Posse comitatus is a U.S. law that prohibits the use of federal troops from conducting law enforcement duties on domestic soil unless approved by Congress.

Scanlon said there was no intent to keep the agreement secret on the Canadian side of the border. He noted it will be reported on in the Canadian Forces newspaper next week and that publication will be put on the Internet.

Scanlon said the actual agreement hasn’t been released to the public as that requires approval from both nations. That decision has not yet been taken, he added.
© (c) CanWest MediaWorks Publications Inc.

FORT SAM HOUSTON, Texas — Were an earthquake to occur along the 150-mile-long New Madrid Fault System— which has in the past produced quakes in Illinois, Missouri, Arkansas, Tennessee, Kentucky and Indiana — Army North is ready to assist.

Department of Defense resources stand ready to provide defense support to civil authority in the case of any man-made or natural disaster, said Dr. Paul Stockton, the assistant secretary of defense for Homeland Defense and Americas’ Security Affairs.

Stockton said the DOD is also honing its skills for the possibility of facing complex catastrophes, such as what was practiced in the recent National Level Exercise 11, in which Northern Command and Army North both were key participants.

The exercise scenario featured a 7.7 earthquake along the New Madrid fault, which falls along the Mississippi River. The 7.7 earthquake typifies what Stockton terms as the challenges of complex catastrophes.

“First, the magnitude,” he said, because “it’s so much bigger than anything we’ve faced — way beyond Hurricane Katrina — over 100,000 casualties in the scenario.”

Stockton said such an earthquake would be a complex catastrophe due to the effects of cascading failures of critical infrastructure.

Army North is situated to provide assistance through its 10 direct coordinating elements, which are co-located within the 10 FEMA regions, said the commanding general of U.S. Army North, while speaking before a packed house, July 29, during the Aspen Security Forum in Aspen, Colo.

“We are embedded with FEMA across the country,” said Lt. Gen. Guy C. Swan III. “So this time of the year, especially with hurricanes, we’re joined at the hip with our team of partners.

Swan said units such as Army North, and its military partner units throughout Northern Command and the Department of Defense, bring a wealth of knowledge to the fight.

“The conflicts that we’ve been involved in over the past 10 years have built up a knowledge base within our armed forces on planning, training and equipping for a variety of threats,” Swan said. “We often find ourselves in a capacity-building role with our federal partners. We play an advise and assist role, just as we do overseas, with our own federal partners.”

During the security conference, Swan served as a member of a three-person panel discussion titled: “The war abroad and the threat at home.” Among the highlights was a discussion on the Department of Defense’s, Army North’s and U.S. Northern Command’s role in homeland security.

The general was joined on the panel by Stockton and retired Lt. Gen. Douglas Lute, who serves as a special assistant to the president for Afghanistan and Pakistan.

During the discussion, Swan also touched on another concern he has for the United States.

“Mexico is something that we ought not to take our eye off of,” Swan said.”The strength of the transnational criminal groups, the cartels, is very disturbing — and even more so because it’s on our southern border. Part of our military-to-military mission within the command is to work with our military counterparts and other security forces in Mexico to compliment what we do with the border patrol, the (Center for Domestic Preparedness) and others.”

Among Army North’s responsibilities are providing the land component support to Northern Command for homeland defense and homeland security responsibilities, and providing military support to other federal agencies, such as FEMA, in a disaster. The command also provides military support to U.S. Customs and Border Protection and the U.S. Border Patrol for border security, and it provides training and assistance support to the security forces of Mexico in the fight against transnational criminal organizations and drug cartels.

Other aspects of the command’s responsibilities include maintaining trained and ready response forces for chemical, biological, radiological, nuclear, and high-yield explosive weapons-of-mass-destruction attacks or disasters, in addition to defending the homeland against missile attacks, providing maritime and air defense of North America, and various other missions.