California Gov. Jerry Brown is vetoing legislation requiring police to obtain a court warrant to search the mobile phones of suspects at the time of any arrest.

The Sunday veto means that when police arrest anybody in the Golden State, they may search that person’s mobile phone — which in the digital age likely means the contents of persons’ e-mail, call records, text messages, photos, banking activity, cloud-storage services, and even where the phone has traveled.

Police across the country are given wide latitude to search persons incident to an arrest based on the premise of officer safety. Now the nation’s states are beginning to grapple with the warrantless searches of mobile phones done at the time of an arrest.

Brown’s veto message abdicated responsibility for protecting the rights of Californians and ignored calls from civil liberties groups and this publication to sign the bill — saying only that the issue is too complicated for him to make a decision about. He cites a recent California Supreme Court decision upholding the warrantless searches of people incident to an arrest. In his brief message, he also doesn’t say whether it’s a good idea or not.

“The courts are better suited to resolve the complex and case-specific issues relating to constitutional search-and-seizure protections,” the governor wrote.

Because of that January ruling from the state’s high court, the California Legislature passed legislation to undo it — meaning Brown is taking the side of the Supreme Court’s seven justices instead of the state Legislature. The Assembly approved the bill 70-0 and the state Senate, 32-4.

The bill’s sponsor, Sen. Mark Leno (D-San Francisco), was flummoxed by Brown’s action. “It was a curious veto message suggesting that the courts could resolve this more effectively than the state Legislature,” he said in a telephone interview.

Under California statehouse rules, neither Leno nor any other lawmaker may introduce the legislation for at least a year.

Orin Kerr, one of the nation’s leading Fourth Amendment experts, said Brown should have backed the state’s Legislature. “I think Governor Brown has it exactly backwards. It is very difficult for courts to decide Fourth Amendment cases involving developing technologies like cellphones,” he said.

In 2007, there were 332,000 felony arrests in California alone — a third of which did not result in conviction.

Brown’s veto also shores up support with police unions and the Peace Officers Research Association of California, a police union that opposed the legislation and recently donated $38,900 to Brown’s campaign coffers. “Restricting the authority of a peace officer to search an arrestee unduly restricts their ability to apply the law, fight crime, discover evidence valuable to an investigation and protect the citizens of California,” the association said in a message.

That support would be key if Brown decides to seek a second term.

In the last year alone, at least seven police unions donated more than $12,900 each to Brown. Those unions, including the California Association of Highway Patrolmen and the Sacramento County Deputy Sheriff’s Association, had given Brown more than $160,000 in combined contributions.

Have two Britishh academics found the key to why Americans keep being bombarded today with a discourse that highlights dramatic “emergency” events — that then leads inevitably to legislation that chips away (or chisels away) at what is left of the Constitution? I believe they have. Dr. Stephen Morton and Dr. Elleke Boehmer, in their very important new book, Terror and the Postcolonial, show how today’s headlines on CNN may have been crafted for use in India in the 1800s — perfected throughout the nineteenth century — and road-tested on unfortunate Irish citizens in the 1910s.

This weekend, in an Oxford lecture titled “Travelling Texts in a Time of Emergency“, Morton demonstrated that the British “practiced” techniques for repressing populations in their colonies. His conclusions are deeply relevant, not just to a British colonial or post-colonial reality but to the American “Homeland.”

He looked at an essay by Walter Benjamin, the “Eighth Thesis on the Philosophy of History.” It is a 1933 essay — very important timing — in which Benjamin, who was watching the consolidation of European fascism, began to say: don’t believe the language about “terror”; don’t be fooled into the propaganda that the need for “a state of emergency” is an aberration, a response to genuine dramatic threats. Don’t be taken in by it. “The tradition of the oppressed teaches that the “state of emergency” is a permanent historical tradition. The “state of emergency” exists permanently as a state of lawlessness — it is not the exception but the rule.” In other words, Benjamin saw clearly in 1933 that the German discourse of “Oh my God, things are really unstable, we need to suspend certain civil liberties for the sake of national security” was a hoax — a historical constant always used by elites and always for the same reasons.

Prof. Morton went on to trace this practice — of manipulating the words “terrorist” and propagandizing a need for states of emergency that lead to preventive detention, torture, suspension of constitutional rights and so on — to many places in the British colonial regime. He noted that “terrorist” was a term the British often applied to local populations that were fighting for — yes — freedom from oppressive British rule. He pointed out that the “Bengal Suppression of Terror Act” of the 1900s, for instance, was aimed at local freedom movements. (The word “Terrorist” was first coined in reference to the French Revolutionary state.)

Legal scholar Albert Venn Dicey pointed out in 1883 that martial law is “anomalous to the law in England” and a sign of a totalitarian state or a terrorist state. In spite of this ideology that Britain is a constitutional democracy, Morton said that British Colonial governments have all used emergency legislation to suppress colonial uprisings. They allowed the Colonial governors to develop torture, preventive detention, the maintenance of “order” by force, the denial of rights to subjects. The “state of emergency” operated “as a traveling concept for global counter-insurgencies, reiterated in different colonial authorities” around the world. Even more disturbingly fascinating, he made the case that British authorities would “practice” certain kinds of repression on Ireland between 1900 and 1922 — and then “export” these practices overseas. So in Ireland at that time, “subversive” material was criminalized in newspapers, and so on. The “state of emergency‘ in that period — for Ireland, not for Britain as a whole — “was the rule, and the application of the Constitution the exception.”

Morton went on to say that the “causative” emergencies for the “state of emergency” were often manufactured, for example in Malaya; that the ostensibly “dramatic character of these emergencies made them appear spontaneous rather than systemic”; and the strategy was the same for the imposition of Martial Law.

I’ve looked, as readers may know, at various fascist and totalitarian regimes, to get a handle of what the US was up to in terms of the erosion of our civil liberties. But I did not look at British colonialism in relation to the systemic development of the deployment of “state of emergency” policies to suspend US Constitutional rights, and I should make that connection now. It seems clear to me from this lecture and from other research that the architects of the suppression of our rights have probably studied British colonial rule as well as other repressive regimes. 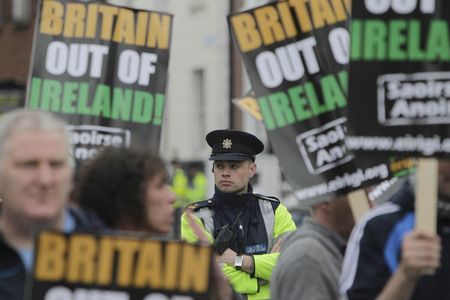 Why would this historical source be especially useful for them? Because Britain, like America, as a putative constitutional democracy, can’t just say, “Okay, now we are a police state, and we are suspending the Constitution.” Britain in that period, like the United States today, needed to maintain its own ideology as a “free” nation, an exporter of human rights and democracy, around the world, to all these benighted brown peoples. So Britain needed to develop a discourse of rationale — hence the “state of emergency” discourse and the reliance on whipped-up “dramas” to justify a seeming exception to constitutional democracy that is actually the rule.

I think we should pay close attention to what Walter Benjamin tried to tell readers in 1933 — and really take in what Professors Morton and Boehmer are alerting us to today: “states of emergency” have a long historical record of being manipulated by elites, for repressive purposes that have nothing to do with the always “dramatic” rationales that are used to justify them; and British colonial rule was a laboratory of the very tactics and the same soundbites that we are seeing at home now in the United States. The past is prologue.