Man clings to life after beating–

Police are asking for help with the case – One of attackers said “This is justice for Trayvon!”

A Mobile man clings to life tonight after a brutal beating yesterday by a mob armed with chairs, pipes and paint cans in his front yard.

Mobile police need your help to catch a mob that beat Matthew Owens so badly that he’s in critical condition.

According to police, Owens fussed at some kids playing basketball in the middle of Delmar Drive about 8:30 Saturday night. They say the kids left and a group of adults returned, armed with everything but the kitchen sink.

Owens’ sister, Ashley Parker, saw the attack. “It was the scariest thing I have ever witnessed.” Parker says 20 people, all African American, attacked her brother on the front porch of his home, using “brass buckles, paint cans and anything they could get their hands on.”

Police will only say “multiple people” are involved.

Don’t expect this to get much media attention.
It doesn’t fit their narrative.

UPDATE: Children and women in dresses joined in the beating.
Local 15 reported:

At first, when he heard his friend at the door, the man thought it was a joke. “Then I saw about 10 to 15 people from little kids and women with dresses to adult men, just flooding onto the property, surrounding the car, hollering and screaming,” he says. “And then I heard Matthew saying, ‘ I’m sorry, man, I’m sorry. I’m sorry.’ And then, the next thing, before I could get to the door, because we have it all deadbolted and everything, and before I could get it open, I heard all the beating and banging.”

…Meanwhile, the incident has left some who live on this street troubled and nervous including Owens’ friend. “Oh, my God” he says. “He was laying on the ground full of blood. I mean, it was horrible. His head, everything. Blood was pouring from his head, both sides. And his whole body was drenched in blood.”

Mobile Police are encouraging anyone who knows the identity of the attackers to contact Crimestoppers. 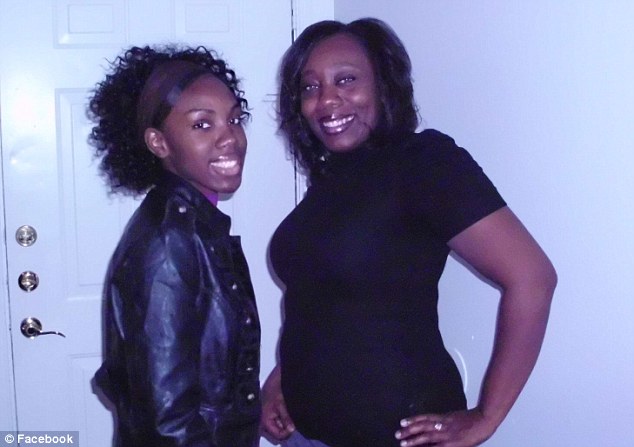 Nurse Kidnapped Baby Keegan After Miscarriage
PHOTO: Law enforcement officers enter an apartment near the scene where a mother was killed and her baby, Keegan Schuchardt,

The nurse who killed a young Texas mother and kidnapped her 3-day-old baby told police she needed the infant to show to her fiance, whom she had misled into believing she had recently given birth to his child.

In a press conference this afternoon, police provided more details of the kidnapping and murder. They said that the suspect, Verna Deann McClain, 30, contacted them Tuesday afternoon as officers frantically searched for 3-day-old Keegan Schuchardt, who was kidnapped after his mother, Kayla Golden, was gunned down outside of a pediatrician’s office. Police had put out an Amber Alert for the child, asking the public to report any sightings of McClain’s vehicle to authorities.

McClain contacted police to say she was affiliated with the vehicle being sought but had nothing to do with the crimes. Her story “fell apart” while investigators interviewed her, according to Montgomery County Sheriff Captain Bruce Zenor. McClain then confessed to killing Golden, 28, and snatching baby Keegan.

Golden was shot dead and then run over in the parking lot of the doctor’s office where she was taking Keegan for a check-up. Police said that they believe McClain acted alone, pulling up in a Lexus SUV next to Golden’s car before shooting her, putting the infant in her car, and then hitting Golden with the SUV on the way out of the parking lot.

“My baby, my baby!” Golden reportedly screamed as her infant boy was taken from his car seat.

McClain is charged with capital murder and is being held without bail in a solitary jail cell.

Zenor said during a press conference today that McClain kidnapped the baby because she had told her fiance that she had given birth recently to his child, when in reality she had suffered a miscarriage. She was set to marry the man in May, and felt she needed a baby to show him, Zenor said.
PHOTO: Law enforcement officers enter an apartment near the scene where a mother was killed and her baby, Keegan Schuchardt, inset, kidnapped, April 17, 2012, in Spring, Texas.
Montgomery County Sheriff’s Office/AP
Law enforcement officers enter an apartment… View Full Size
Texas Mother Killed, Newborn Stolen: Nurse Charged Watch Video
Texas Mother Killed, Newborn Stolen: Arrest Made Watch Video
Newborn Kidnapped After Mom Shot Dead Watch Video

Police said they believe Golden was a random target, and that McClain had been familiar with the pediatrician’s office from taking her own children there. McClain has three children.

Police said that from the moment witnesses called to report a woman shot in the parking lot in Spring, Texas, multiple law enforcement agencies raced to find baby Keegan. Two detectives spotted a vehicle matching the description of the one in the incident in a nearby apartment complex and entered McClain’s home, but found it empty.

McClain later showed up at her apartment, and told police that the baby was at the apartment of her sister, in a neighboring county. A SWAT team in that county found Keegan alive six hours after the kidnapping.

Police said McClain has expressed remorse for the killing.

Keegan is now with a relative, police said. They would not comment on why the child is not being released to his father.

Golden’s other two children are in a “safe place,” according to her mother, Linda Golden, though she would not specify where. It was unclear whether Keith Schuchardt is the father of Golden’s other children, ages 4 and 19 months.

“It was wonderful. It was nice to know he’s still alive,” he said today. “[Golden] was the best girl I’ve ever been with. She’s just good for the kids, good with the kids. She helped me out through a lot of stuff.”

“Her husband is devastated. We don’t know what we’re going to do. They loved each other very much, they really were just so sweet to each other,” she said. “Me and her were really really close, we went everywhere together, did everything together. She was my only daughter. I don’t know what I’m going to do.”

Linda Golden said her daughter did not know her murderer, and was unlikely to fight with or disagree with anyone.

Witnesses said the mom fought to keep the baby from the kidnappers, but ended up in the parking lot with gunshot wounds.

“She was laying on the ground. She wasn’t moving for nothing,” witness Joshua Jesson told ABC station KTRK in Houston. “But then I saw a blue Lexus drive off in that direction.”

“The child was being put into the suspect vehicle and that’s when the mother tried to get into the car,” Lt. Dan Norris with the Montgomery County Sheriff’s Office said. “The car sped away, knocking the lady to the ground.”

An affidavit obtained by ABC News from the Montgomery County police states that McClain admitted to shooting Golden and taking the baby.

According to the affidavit, McClain’s sister, Corina Jackson, had recently said that her sister would be adopting a baby soon. After she allegedly killed Golden and stole her newborn, McClain stated to her sister that she now had the child. McClain has three children ages 16, 10 and 6.

“There were statements that were made by Ms. McClain that led us to believe this was an intentional act on her part, not that Ms. Golden was targeted specifically, but that this was part of a plan to kidnap a child,” Ligon said.

McClain, a mother of three, made her first appearance in magistrate court this morning. According to the Montgomery County district attorney’s office, she was charged with capital murder early this morning.

“She’s given a full statement to the detectives with the Montgomery County Sheriff’s Department,” the district attorney, Brett Ligon, said today on “Good Morning America.” “As part of the statement with that agency, in conjunction with the other evidence that we were able to obtain yesterday…we did charge her [McClain] in the early hours of this morning with capital murder.”

Though witnesses from the scene of the crime had told authorities there were two people in the car, police today said they are convinced that McClain had acted alone.