The Tricky Chemistry of Attraction

Taking Birth-Control Pills May Mask the Signals That Draw the Sexes Together, Research Shows

Much of the attraction between the sexes is chemistry. New studies suggest that when women use hormonal contraceptives, such as birth-control pills, it disrupts some of these chemical signals, affecting their attractiveness to men and women’s own preferences for romantic partners.

Researchers say birth control pills are upending the natural influence of hormones on attraction. WSJ’s Shirley Wang reports on a new study in lemurs that show how contraceptives may influence the way the primates pick and choose their mates.

The type of man a woman is drawn to is known to change during her monthly cycle—when a woman is fertile, for instance, she might look for a man with more masculine features. Taking the pill or another type of hormonal contraceptive upends this natural dynamic, making less-masculine men seem more attractive, according to a small but growing body of evidence. The findings have led researchers to wonder about the implications for partner choice, relationship quality and even the health of the children produced by these partnerships.

Evolutionary psychologists and biologists have long been interested in factors that lead to people’s choice of mates. One influential study in the 1990s, dubbed the T-shirt study, asked women about their attraction to members of the opposite sex by smelling the men’s T-shirts. The findings showed that humans, like many other animals, transmit and recognize information pertinent to sexual attraction through chemical odors known as pheromones. The study also showed that women seemed to prefer the scents of men whose immune systems were most different from the women’s own immune-system genes known as MHC. The family of genes permit a person’s body to recognize which bacteria are foreign invaders and to provide protection from those bugs. Evolutionarily, scientists believe, children should be healthier if their parents’ MHC genes vary, because the offspring will be protected from more pathogens.

Couples dancing in a ballroom. When women are ovulating, they tend to be drawn to men with greater facial symmetry and more signals of masculinity, such as muscle tone, a more masculine voice and dominant behaviors.

What happens to a woman during her most fertile days?

Her voice becomes higher pitched.
Men are more attentive to her, with behavior ranging from thoughtful to jealous.
Her scent becomes more attractive to men.
She seeks men with more masculine features.
Her social behavior changes, including increased flirting.
She tries to look more attractive and may choose more-revealing clothing.
If she is with a less masculine man, she may feel less attracted to him.

More than 92 million prescriptions for hormonal contraceptives, including pills, patches and injections, were filled last year in the U.S., according to data-tracker IMS Health.

Researchers say their aim isn’t to scare or stop women from taking hormonal contraceptives. “We just want to know what we’re doing” by taking the pill, says Alexandra Alvergne, a researcher in biological anthropology at University College London in the U.K. “If there is a risk it affects our romantic life and the health status of our children, we want to know.” Dr. Alvergne last year published a review detailing the existing literature on the topic in the journal Trends in Ecology and Evolution.

Both men’s and women’s preferences in mates shift when a woman is ovulating, the period when she is fertile, research has shown. Some studies have tracked women’s responses to photos of different men, while other studies have interviewed women about their feelings for men over several weeks. Among the conclusions: When women are ovulating, they tend to be drawn to men with greater facial symmetry and more signals of masculinity, such as muscle tone, a more masculine voice and dominant behaviors. The women also seemed to be particularly attuned to MHC-gene diversity. From an evolutionary perspective, these signals are supposed to indicate that men are more fertile and have better genes to confer to offspring.

Women tend to exhibit subtle cues when they are ovulating, and men tend to find them more attractive at this time. Women try to look more attractive, perhaps by wearing tighter or more revealing clothing, says Martie Haselton, a communications and psychology professor at the University of California, Los Angeles. Research on this includes studies in which photos that showed women’s clothing choices at different times of the month were shown to groups of judges. Women also emit chemical signals that they are fertile; researchers have measured various body odors, says Dr. Haselton, who has a paper on men’s ability to detect ovulation coming out in the journal Current Directions in Psychological Science. 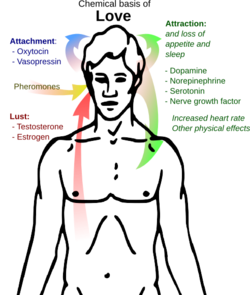 Such natural preferences get wiped out when the woman is on hormonal birth control, research has shown. Women on the pill no longer experience a greater desire for traditionally masculine men during ovulation. Their preference for partners who carry different immunities than they do also disappears. And men no longer exhibit shifting interest for women based on their menstrual cycle, perhaps because those cues signaling ovulation are no longer present, scientists say.

Some women using birth-control pills have long reported changes to their libido and mood. Research is still in the early stages to explore the implications of taking hormonal contraceptives for women’s choice of mates and for fidelity in relationships. Researchers speculate that women with less-masculine partners may become less interested in their partner when they come off birth control, contributing to relationship dissatisfaction. And, if contraceptives are masking women’s natural ability to detect genetic diversity, then the children produced by parents who met when the woman was on the pill may be less genetically healthy, they suggest.

“We don’t have enough research to draw a firm conclusion yet,” says Dr. Haselton. “It is certainly possible that if women don’t experience that little uptick in [desiring] masculinity that they end up choosing less masculine partners,” she says.

That could prompt some women to stray, research suggests. Psychologist Steven Gangestad and his team at the University of New Mexico showed in a 2010 study that women with less-masculine partners reported an increased attraction for other men during their fertile phase. Women partnered with traditionally masculine partners didn’t have such urges, according to the study of 60 couples.

In another study, the researchers analyzed MHC gene samples of 48 couples. Women partnered with men with whom they shared the least genetic diversity reported being less sexually responsive to their mates. The study was published in 2006 in the journal Psychological Science.

There is also accumulating evidence indicating men react differently to women when they are on birth control. A 2004 study in the journal in Behavioral Ecology used the T-shirt study methodology but instead put the shirts on 81 women. A panel of 31 men, smelling the T-shirts, experienced the greatest attraction for the non-pill-using women when they were ovulating. Twelve women on the panel didn’t detect any difference.

The findings, published in the journal Proceedings of the Royal Society, Biological Sciences this year, showed that the injection of Depo-Prevara, a long-lasting contraceptive that is approved for use in humans, dramatically altered the chemicals that female lemurs give off to indicate their identity and how genetically healthy they are.

The females given the contraceptive became overall less appealing to the males than before getting the injection, says Christine Drea, a professor in Duke’s evolutionary anthropology department and senior author on the study. The contraceptive erased all the normal information the odor signals conveyed, she says.

Though the study would need to be conducted in humans to draw direct conclusions, there are potential parallels to people, Dr. Drea says. Birth control “could be mixing up your own [signals] and others aren’t smelling the real you,” she says.

The Redemption of General Butt-Naked

It is 1982 and as day breaks in Liberia, the Krahn tribe prepares for the initiation of its high priest....