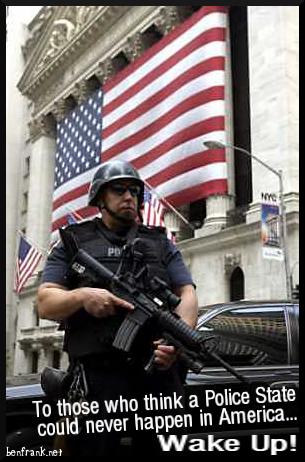 The United States of Jail

MSNBC asked this key question on March 4, 2011 in the story linked below:
Why do America’s police need an armored tank?

That’s a damned good question as the vehicle demonstrated in the vehicle above is specified to resist a .50 caliber bullet and all other small arms fire that “average” civilians use inside the United States of America and overseas. So just why does the Department of Homeland Security feel that it is necessary to provide $300,000 grants to purchase these Light Armored Vehicles (LAV’s) for police dpeartments since the latter days of the Bush administration to provide what amounts to a civilian supplemental “Home Guard” to supplant the Federal Government’s new private un-Constitutional army. Especially since the number of successful organized terrorist attacks since 9/11/01 on American soil can be counted within ten fingers.

If the new American paramilitary is being created not to repel a massive invasion of Al Qaeda based terrorists unleashed on our homeland, then why are we militarizing our society to a point that surpasses the wildest dreams of former Iron Curtain leaders of the 1970?s?

Perhaps it is not to keep the masses protected but incarcerated; to hold their wealth and prevent it from leaving the country, to control their spending with strict illegal monitoring and currency manipulation, to tax without representation, and to modify behavior just like prison inmates are manipulated using controls beyond the scope of most inmates mental capacity. America is about to become a society built on the Stasi model, as Steven Kurlander unwittingly reported in his Huffington Post editorial titled “Domestic Surveillance: Spy vs. Spy, American vs. American.” In his piece from March 13, 2013 he observed:

We walk Main Streets and drive thoroughfares that are monitored by cameras and speed passes. We work at computer terminals that allow our bosses to monitor our behavior and work productivity, minute by minute-and we use social media and search engines that can track our usage and establish personality profiles to sell and share.

And we now also routinely spy on our families and one another too in our homes, businesses, and elsewhere, simply be clandestinely hiding spy cameras or affixing and monitoring GPS monitors to phones, computers, vehicles or possessions.

“It’s truly a case of spy vs. spy when parents keep tract of kids, neighbors can keep tabs on the goings on around their home and spouses can detect infidelity with a spy cam or GPS tracker,” says Dan Iacono, who owns DynaSpy Security, Inc., which sells an array of sophisticated spying equipment at two very busy stores in Long Island and Fort Lauderdale. He describes his business as “booming.”

Thus the idea of using fellow “inmates” to rat out troublemakers for rewards, to report to the “Party” for special dispensation is being established by training the youth of America to snitch on their parents and to “see something, say something” even though the observer has little if any formal training regarding the threat posed by a little old lady yelling at her dog versus an alleged terrorist carrying a backpack listening to his iPod. In April of 2011, I warned about the following:

The Largest Detention Camp in World History is Almost Complete

It is now completed and beginning the process of selective enforcement against all opposition to the goals of not just our Imperial President, but of the old guard in the so called Republican Party which was the preceding unit which created the foundation for the modern day police state which Obama is simply following through on by using it and maximizing its capacity. America has now evolved beyond the Patriot Act towards a perverse combination of the old Soviet Union, East Germany, Communist China, and quite possibly in the near future Pol Pot’s Cambodia of the 1970?s:

Yet nobody remembers the words of this long forgotten FBI informant or the fact that the individuals he discuss are close friends of not just the President of the United States, but radical globalists who have pined and planned for a quasi-Marxist alternative to the Rockefeller vision of a central bank controlled world. The new improved “democratic” America will make all of the tyrannies in history look like a Romper Room field trip by any comparison with the technology and firepower they have amassed.

If the United States is not building a massive national prison on the Soviet model, then why is Obama constructing a massive civilian military which is now in possession (estimates based on recent 2,717 LAV’s purchased by DHS plus other government department acquisitions) of more Light Armored Fighting Vehicles than North and South Korea, Israel, and Iran?

This does not include armed and unarmed drones (classified), total heavy weapons purchased (classified), number of armed assault helicopter or fixed wing manned aircraft (classified) nor total number of domestic armed “Private Security Contractors” (aka, mercenaries) working within the borders of the U.S. or its territories under the control of non-Pentagon, non-military agencies. After all gang, one can not have a prison without a sufficient guard force to preserve the peace and avoid the conflicts which allows Federal authorities to use military style force without violating the Posse Comitatus Act of 1878.

If one doubts the efficacy of the data and statements above, I simply remind everyone of the training exercise from the video in the article I published in April of 2008:

Much to this author’s consternation, the budgetary data regarding heavy arms purchases, armed fix wing and helicopter allocations, plus the authorizations for “private security contractors” to use military equipment purchased for or by the American military and various Cabinet level departments (DHS, EPA, DOE, Park Service Police, etc.) is CLASSIFIED. But why?

To dupe a mass media indoctrinated public into the perception of an iFreedom while denying God, Country, nor their family in order to reach the top of the prison population and earn “trustee” status in the eyes of the authorities. The segregation of the citizens is so thorough, so complete that outrages no longer stir the masses into action nor fire the public up to a point where they are in the streets demanding real justice as opposed to the Marxist created “social justice.”

The doubters, the advocates for a modernization of the American system claim that if the U.S. has indeed become a police state that there would be a systemic pattern of propaganda for discriminating against the old way of thinking (Los Angeles Times Op-Ed for example), illegal programs designed to bypass the 4th Amendment, and of course crazy East German like events like cavity searches for children, the elderly and crippled:

Amazingly enough the level of outrage barely registered with the American sheeple who rejects the idea of boycotting the airline industry until they go bankrupt as non Law Enforcement personnel engage in UNCONSTITUTIONAL violations of the 4th Amendment to the United States Constitution. Thus, as in the Soviet Union, Communist China, and yes, that tired old cliche, Nazi Germany, the band marches on until the ovens are fired up and someone asks the question “What’s that awful burning smell?”

Welcome to prison my fellow citizens. Welcome to the 4th Reich. The construction of the camp is now complete.SOURCE

Apocalyptic Franciscan prophecies and heraldic guffaws aside, many have overlooked another Catholic Saint he could have drawn the papal name...