TIME: Everything’s Tracked- Get Over It

In an astounding cover story for the March 21 issue of TIME called ‘Your Data for Sale,’ author Joel Stein tells readers to simply “get over” constant surveillance. The tagline, “Everything about you is being tracked– get over it” puts the issue in your face. Yeah, get over it, and the TSA porno-scanners and grope-downs, too.

Newsweek, like TIME, another Skull and Bones-dominated media organ, similarly published a shocker in 2009 with its cover story, ‘The Case for Killing Granny,’ preparing the masses to simply accept massive shifts in society’s norms as if it were a trifling occurrence. Unauthorized NSA wiretapping and other related surveillance (started long ago) was at least controversial during the Bush Administration, though it has unabashedly continued under Obama. 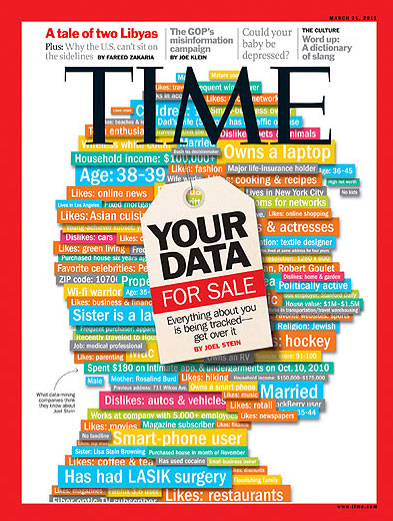 In an promotional interview with CNN about the article, author Joel Stein makes light of the fact that his social security number (and lots of other personal data), as well as that of his family members, were easily found online. Stein and CNN host Kiran Chetry giggle like schoolgirls about Facebook’s exploitation of personal data, and the many other data-mining companies who keep “permanent files” on us. Stein even quips that he has “blackmail material” now on his mother and sister, whose SSN numbers he obtained during his research. Stein further called personalized-ads on systems like Google’s G-MAIL “kinda cool.” That’s right, now that we’re at the heart of a big brother system, 1984 is kinda cute-and-fuzzy.

Gadget, covering the upcoming TIME article, has posted an article ‘How to Opt Out of Everything Online‘ with information on how to opt-out from many of the online data companies. Below is the first of a long-list of resources and/or preference settings where you can lobby to take yourself off of the data-mining lists:

Oh man, strap in for this one. The NAI Opt-out Tool shows you all the big-name marketing companies that have installed tracking cookies on your computer and lets you opt out of some or all of them in one fell swoop.

While these options may improve some aspects of online privacy, don’t hold your breath. Your ISPs alone are likely storing complete records of everything you do, to say nothing of what the NSA and other intelligence outlets have underway.

It would seem the death of privacy and the 4th amendment is officially upon us. Morever, it’s something to be passively accepted and even laughed about. The TIME story has a publish date of March 21, 2011; the detailed story text is not yet available.

A large explosion at Japan’s stricken Fukushima Daiich nuclear power plant reveals that a meltdown is now underway following the...