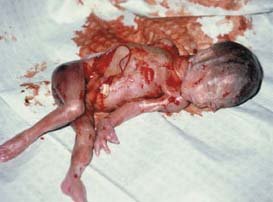 Florida legislators considering a bill to require abortionists to provide medical care to an infant who survives an abortion were shocked during a committee hearing this week when a Planned Parenthood official endorsed a right to post-birth abortion.

Alisa Laport Snow, the lobbyist representing the Florida Alliance of Planned Parenthood Affiliates, testified that her organization believes the decision to kill an infant who survives a failed abortion should be left up to the woman seeking an abortion and her abortion doctor.

“So, um, it is just really hard for me to even ask you this question because I’m almost in disbelief,” said Rep. Jim Boyd. “If a baby is born on a table as a result of a botched abortion, what would Planned Parenthood want to have happen to that child that is struggling for life?”

“We believe that any decision that’s made should be left up to the woman, her family, and the physician,” said Planned Parenthood lobbyist Snow.

Rep. Daniel Davis then asked Snow, “What happens in a situation where a baby is alive, breathing on a table, moving. What do your physicians do at that point?”

Rep. Jose Oliva followed up, asking the Planned Parenthood official, “You stated that a baby born alive on a table as a result of a botched abortion that that decision should be left to the doctor and the family. Is that what you’re saying?”

Again, Snow replied, “That decision should be between the patient and the health care provider.”

“I think that at that point the patient would be the child struggling on the table, wouldn’t you agree?” asked Oliva.

“That’s a very good question. I really don’t know how to answer that,” Snow said. “I would be glad to have some more conversations with you about this.”

Later another representative asked Snow, “What objection could you possibly have to obligate a doctor to transport a child born alive to a hospital where it seems to me they would be most likely to be able to survive?”

Snow said Planned Parenthood was concerned about “those situations where it is in a rural health care setting, the hospital is 45 minutes or an hour away, that’s the closest trauma center or emergency room. You know there’s just some logistical issues involved that we have some concerns about.”

You can watch the full exchange at the 39-minute mark of this video.

Turin Shroud ‘is not a medieval forgery’

Experiments conducted by scientists at the University of Padua in northern Italy have dated the shroud to ancient times, a...