What do HAARP, Chemtrails, and Global Warming all have in common?

Chemtrails are bad news. They contain barium and aluminum, which have the potential to destroy ecosystems around the world. But what if this destruction is merely an inevitable and acceptable consequence of a much larger program? A program intended to be part of an all-in-one solution to global control and manipulation?

What is the purpose of HAARP? To understand this, we can look to information in the patent:

This invention has a phenomenal variety of possible ramifications and potential future developments. As alluded to earlier, missile or aircraft destruction, deflection, or confusion could result, particularly when relativistic particles are employed. Also, large regions of the atmosphere could be lifted to an unexpectedly high altitude so that missiles encounter unexpected and unplanned drag forces with resultant destruction or deflection of same.

Weather modification is possible by, for example, altering upper atmosphere wind patterns or altering solar absorption patterns by constructing one or more plumes of atmospheric particles, which will act as a lens or focusing device.

Also as alluded to earlier, molecular modifications of the atmosphere can take place so that positive environmental effects can be achieved. Besides actually changing the molecular composition of an atmospheric region, a particular molecule or molecules can be chosen for increased presence. For example, ozone, nitrogen, etc. concentrations in the atmosphere could be artificially increased. Similarly, environmental enhancement could be achieved by causing the breakup of various chemical entities such as carbon dioxide, carbon monoxide, nitrous oxides, and the like.

Transportation of entities can also be realized when advantage is taken of the drag effects caused by regions of the atmosphere moving up along diverging field lines. Small micron sized particles can be then transported, and, under certain circumstances and with the availability of sufficient energy, larger particles or objects could be similarly affected. Particles with desired characteristics such as tackiness, reflectivity, absorptivity, etc., can be transported for specific purposes or effects. For example, a plume of tacky particles could be established to increase the drag on a missile or satellite passing therethrough. Even plumes of plasma having substantially less charged particle density than described above will produce drag effects on missiles which will affect a lightweight (dummy) missile in a manner substantially different than a heavy (live) missile and this affect can be used to distinguish between the two types of missiles.

A moving plume could also serve as a means for supplying a space station or for focusing vast amount of sunlight on selected portions of the earth.

Surveys of global scope could also be realized because the earth’s natural magnetic field could be significantly altered in a controlled manner by plasma beta effects resulting in, for example, improved magnetotelluric surveys.

Electromagnetic pulse defenses are also possible. The earth’s magnetic field could be decreased or disrupted at appropriate altitudes to modify or eliminate the magnetic field in high Compton electron generation (e.g., from high altitude nuclear bursts) regions. High intensity, well controlled electrical fields can be provided in selected locations for various purposes. For example, the plasma sheath surrounding a missile or satellite could be used as a trigger for activating such a high intensity field to destroy the missile or satellite.

Further, irregularities can be created in the ionosphere which will interfere with the normal operation of various types of radar, e.g., synthetic aperture radar.

The present invention can also be used to create artificial belts of trapped particles which in turn can be studied to determine the stability of such parties.

Still further, plumes in accordance with the present invention can be formed to simulate and/or perform the same functions as performed by the detonation of a “heave” type nuclear device without actually having to detonate such a device. Thus it can be seen that the ramifications are numerous, far-reaching, and exceedingly varied in usefulness

In a nutshell, we can see that HAARP is intended to do the following:

Destroy, deflect, or confuse missiles or aircraft
Modify the weather
Change the molecular composition of an atmospheric region, by increasing or decreasing ozone, nitrogen, carbon dioxide, carbon monoxide, and/or nitrous oxides
Increase the drag on a missile or satellite
Focus vast amounts of sunlight on selected portions of the earth.
Alter the earth’s magnetic field for things such as surveying
Create high intensity, well controlled electrical fields in selected locations for various purposes
Create irregularities in the ionosphere, which will interfere with the normal operation of various types of radar, e.g., synthetic aperture radar
Create plumes to simulate and/or perform the same functions as performed by the detonation of a “heave” type nuclear device without actually having to detonate such a device.

Does any of this send chills up your spine? Well, it should. But this did not start with the HAARP patent. Ten years earlier, a patent was obtained which contained a “method and apparatus for triggering a substantial change in earth characteristics and measuring earth changes.”

There is disclosed method and apparatus for triggering a substantial change in ionospheric characteristics of the earth and measuring certain selected characteristics of the earth. Substantial energetic particle precipitation is triggered through injection of low energy ionized gas, such as hydrogen, in the region of large fluxes of energetic particles in or near the magnetic equator. The loss process is known to occur naturally but a triggered change is achieved through injection of larger amounts of low-energy ionized gas than are naturally present, preferably in the cusp region, which usually extends inside the synchronous orbit for several hours about local midnight. With this information in hand, the inventor of HAARP was ready to reveal technology that contains one of the most dastardly plans for global manipulation possible – selective weather modification.

What do chemtrails have to do with it?

According to Dr. Michael Castle,

HAARP is utilized for many clandestine missions, of which weather modification is a fundamental objective. Microwave, Extreme Low Frequency (ELF), Very Low Frequency (VLF) and other EMR/EMF-based systems are transmitted into the atmosphere and reflected by the ionosphere back through the Earth’s Stratosphere/Atmosphere where various airborne chemical particulates, polymer filaments and other electromagnetic frequency absorbers and reflectors are used to push or pull the prevailing jet-streams to alter weather patterns. In many instances, drought inducement technologies have been found in patented systems. Drought inducement occurs, according to reviewed technologies, by heating the stratosphere with microwaves, placing airborne chemical particulates in the airspace and thereby changing the base-line moisture gradients via microwaves from HAARP and desiccating regions chemically with barium titanates, methyl aluminum and potassium mixtures.

Jets spray chemtrails consisting of barium titanates, methyl aluminum and potassium mixtures in the stratosphere. These chemtrails are used to reflect and absorb radio and electromagnetic frequencies that are induced by HAARP, and reflected back from the ionosphere. This activity is used to push or pull jet streams, which alter weather patterns. This manipulation can result in all sorts of different weather patterns, including storms, drought, extreme cold, heat, etc.

HAARP technology for weather modification, in conjunction with chemtrails, use the ionosphere and particulate matter in the stratosphere (chemtrails) to reflect energy back and forth in order to control jet streams, which in turn cause the desired weather patterns.

So what to do? Well, like any good entrepreneur, you can take advantage of disaster capitalism to make a few bucks. Want to make a bit of money by creating a global warming scam? Spray a few chemtrails, melt a bit of ice, take a picture of a polar bear surrounded by water, and WALLA! a global warming crisis that can be used to manipulate the public into accepting a carbon tax for breathing. Or how about creating storms that wipe out cities that can be rebuilt in a more pleasing manner for the rich and powerful? You could wipe out local farming communities by creating drought in certain areas, declare a particular fish endangered, then take the farmers’ water in the name of ecology, and allow them to go bankrupt. The land could then be used for a more suitable purpose such as a wildlife preserve so that the rich and powerful can have a playground.

The possibilities are endless, and the cost? Well, the American people can pay for it with their tax dollars. The ramifications? What are a few billion deaths from chemical poisoning, starvation, malnutrition, and disease? Why, a much needed benefit, of course. After all, according to the Georgia Guidestones, the population needs to be reduced to 500 million in order to maintain the earth in the manner that the rich and powerful New World Order mafia would like it to be. 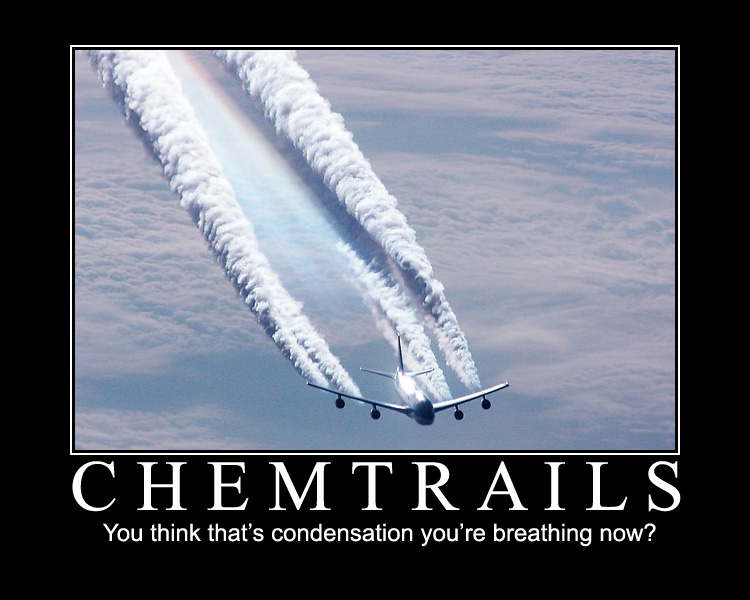 One thought on “What do HAARP, Chemtrails, and Global Warming all have in common?”