Substances harvested from cannabis plants could soon outshine conventional antibiotics in the escalating battle against drug-resistant bacteria. The compounds, called cannabinoids, appear to be unaffected by the mechanism that superbugs like MRSA use to evade existing antibiotics. Scientists from Italy and the United Kingdom, who published their research in the Journal of Natural Products last month, say that cannabis-based creams could also be developed to treat persistent skin infections.

Cannabis has long been known to have antibacterial properties and was studied in the 1950s as a treatment for tuberculosis and other diseases. But research into using cannabis as an antibiotic has been limited by poor knowledge of the plant’s active ingredients and by the controversy surrounding its use as a recreational drug.

Now Giovanni Appendino of the Piemonte Orientale University, in Italy, and Simon Gibbons of the School of Pharmacy at the University of London, U.K., have revisited the antibiotic power of marijuana by systematically testing different cannabinoids’ ability to kill MRSA.

MRSA, short for methicillin-resistant Staphylococcus aureus, is a bacterium that can cause difficult-to-treat infections since it does not respond to many antibiotics. Many healthy people carry S. aureus on their skin, but problems arise when multi-drug-resistant strains infect people with weak immune systems through an open wound. In the worst cases, the bug spreads throughout the body, causing a life-threatening infection.

To make matters worse, resistance to antibiotics is rapidly increasing, and some strains are now even immune to vancomycin, a powerful antibiotic that is normally used only as a last resort when other drugs fail. 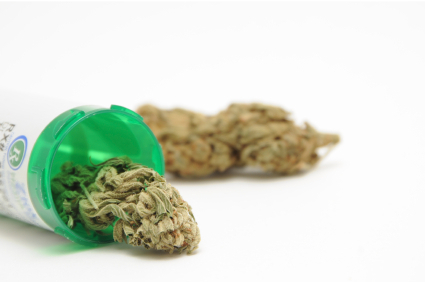 But when Appendino, Gibbons, and their colleagues applied extracts from five major cannabinoids to bacterial cultures of six strains of MRSA, they discovered that the cannabinoids were as effective at killing the bugs as vancomycin and other antibiotics.

“The cannabinoids even showed exceptional activity against the MRSA strain that makes extra amounts of the proteins that give the bugs resistance against many antibiotics,” says Gibbons. These proteins, he explains, allow the bacteria to “hoover up unwanted things from inside the cell and spit them out again.”

Conveniently, of the five cannabinoids tested by the researchers, the two most effective ones also happen to be nonpsychoactive, meaning that they cannot cause a high. “What this means is, we could use fiber hemp plants that have no use as recreational drugs to cheaply and easily produce potent antibiotics,” says Appendino.

This isn’t the first time Marijuana has been shown to have medical benefits. Recently, the father of a 2 year old boy allegedly healed his son of brain cancer by feeding him medical marijuana.

In an attempt to discover how the cannabinoids kill MRSA, the team manipulated several chemical groups within the compounds. Most of the changes did not affect the antibiotic activity at all, and those that did seemed to influence only how well the cannabinoid is taken up by the bacterial cells.

“Everything points towards these compounds having been evolved by the plants as antimicrobial defenses that specifically target bacterial cells,” says Gibbons. “But the actual mechanism by which they kill the bugs is still a mystery. We’ve tested whether the cannabinoids affect common antibiotic targets like fatty acid synthesis or the [DNA-bending enzyme] DNA gyrase, but they don’t. I really cannot hazard a guess how they do it, but their high potency as antibiotics suggests there must be a very specific mechanism.”

Appendino and Gibbons say that cannabinoids could quickly be developed as treatments for skin infections, provided the nonpsychoactive varieties are used. “The most practical application of cannabinoids would be as topical agents to treat ulcers and wounds in a hospital environment, decreasing the burden of antibiotics,” says Appendino.

Whether the cannabinoids could also be delivered in the form of an injection or in pills is less clear, the pair says, because they may be inactivated by blood serum.

Frank Bowling of the University of Manchester, who has had success treating MRSA-infected wounds with maggots, says that “any alternative treatment that removes MRSA from the wound and prevents it from spreading into the body is fantastic and preferable to using antibiotics that have strong side effects and against which resistance is already developing.” He cautions, however, that the researchers still need to show that the cannabinoids are safe to use.

This is not something that Appendino is too concerned about: “The topical use of cannabis preparations has a long tradition in European medicine, and no allergies have been reported.”

Mark Rogerson of GW Pharmaceuticals, a U.K.-based company that develops cannabinoid-based drugs to treat severe pain caused by multiple sclerosis and cancer, says that the discovery that cannabinoids kill MRSA “really underlines the potentially great diversity of medical applications that cannabis-based medicine can have. You can almost think of the cannabis plant as a mini pharma industry in its own right.” But Rogerson says that it is unlikely that existing cannabis-based medicines could be used to treat MRSA because the exact effect will depend on the correct combination and dosage of cannabinoids.

Meanwhile, Appendino and Gibbons hope that antibacterial effectiveness could also make cannabinoids suitable preservatives for cosmetics and toiletries. “The golden standards of preservatives are parabens and chlorinated phenols,” says Appendino, but these compounds do not degrade well in the environment and are strongly suspected to be hormonal modifiers. He also argues that, since all major cannabinoids are similarly effective, complete purification of a single compound isn’t necessary. So semipurified cannabinoid mixtures extracted from nonpsychoactive plants could make a cheap and easy alternative to conventional preservatives.

Yes, Virginia. Giant Rats Do Live In Places Other Than Washington D.C!

It sounds like an urban legend: giant mutant-looking rats roaming a city housing project. Only there's a picture.